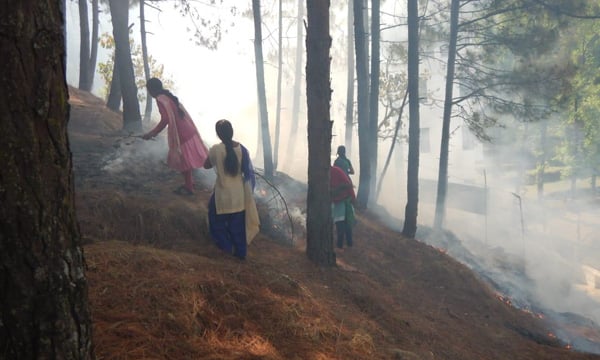 Protecting the Forests of Uttarakhand from Forest Fires

Almost 71 per cent of Uttarakhand’s total geographical area is covered in forests. 12 percent of its total geographical area is part of protected regions with 6 National Parks, 7 Wildlife Sanctuaries, 4 Conservation and 1 Biosphere Reserve area. Other than the environmental aspect, the forest contributes significantly in the state’s revenue due to forest produce and tourism.

Garhwal region is one of the most botanically diverse areas of the Indian Himalaya. However, due to rampant wildfires, certain areas of the hill slopes are now devoid of vegetation, contributing to the loss of biodiversity and subsequent erosion of topsoil incurring both environmental and social costs with repercussions both in the mountains and the adjoining plain eco-systems.

Since 2000, forest fires have affected over 48,000 hectares of the state. Uncontrolled fires contributed heavily to the depletion and exhaustion of natural forests, biodiversity, soil fertility and sustainable forest-based production. They usually produce large tracts of eroded and weed infested lands, altering ecosystems, disturbs and destroys fauna and several smaller animal habitats. Due to this phenomenon climate change in the form of erratic rainfall or reduced precipitation or heavy rainfall increased temperatures in the mountain. It has a direct and indirect adverse impact on agriculture, forests and livelihoods of the people.

While there is not much substantiated research for exact causes behind forest fires, it is commonly considered to be caused by a combination of Environmental and Anthropological reasons.

The forest department cites four causes of wildfires in the state– deliberate fires by locals, carelessness, farming-related activities and natural reasons. According to a government report, locals set forests on fire for growth of good quality grass, to cover up illegal cutting of trees, for poaching and sometimes to even take revenge from somebody including government employees.

The Hans Foundation ​​is planning a two years pilot program, designed to alleviate this problem by sustainably reducing the incidence of forest fires in the targeted area of Garhwal by leveraging involvement of the local community.

Management of forest fires involves four broad components- Mitigation, Preparedness, Response and Recovery. Each component can have multiple strategies. The THF project will be working on Mitigation and Preparedness to complement the forest department’s work on Recovery.

Subscribe our newsletter and keep up with our latest news

Made in the by SIDDATWORK